In the past, I basically existed on one of two speeds:  Manic, when I could do all the things ever, better than everyone else and probably even save the world if I thought hard enough about it, and depressed, when I sat up only when I got uncomfortable lying down.  When I was depressed, I did NOTHING or next to nothing.  I picked up my kids from school.  If I ran the dishes or washed a load of laundry, that was a gold star day.  When I was manic, I made elaborate plans and then did many things while usually accomplishing nothing.

I am now running at a new, normal-for-me-I-hope, speed.  I don’t feel like I can conquer the world every day but I also am able to get dressed, put on makeup, visit friends–even ANSWER THE PHONE.   Every day involves dishes washed and put away, at least one load of laundry, basic cleaning, and playing taxi driver.  While my house is still not up to par, it is getting there, slowly but surely. 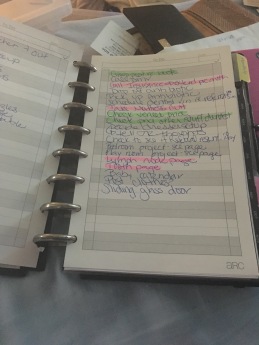 It was harder than usual to make the lists, but I figured that it was because I had full mind that needed to be dumped onto the paper.  I got the lists done and dialed the DMV so I could renew my car registration.  After hearing the expected hold time (25-31 minutes), I grabbed a load of laundry and put it away while I sat with the phone.

50 minutes later, I huffed at the phone when I got disconnected from the man helping me after I waited for almost 40 minutes on hold.  I did get a complete load of laundry put away, I consoled myself.  I picked up my list and highlighted the “7” after “P/A laundry 1 2 3 4 5 6.”  (I have a lot of clean laundry waiting to be put away.)

I smiled as I capped the highlighter and turned back to the list, waiting for the swoosh of 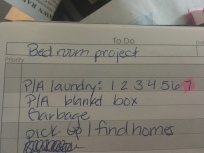 satisfaction and anticipation (for what I had just accomplished and for the rest of my plans). Instead, I felt. . .frustration.  Overwhelmed.  Weary.

This is the first time in memory that I have made project lists without the rush of manic energy.  I had never realized how much of my excitement and enjoyment was coming from a manic reaction.  I am staring at these lists, knowing that there is actually a chance that the things on them will all get done and that I will be able to finish the projects and chores that I have before me.  But instead of excitement and thrill, these lists now represent work.  Do-able work, but work nevertheless.

I don’t know that I love lists like I used to.

View all posts by Michele Hill